What is DHT dihydrotestosterone? 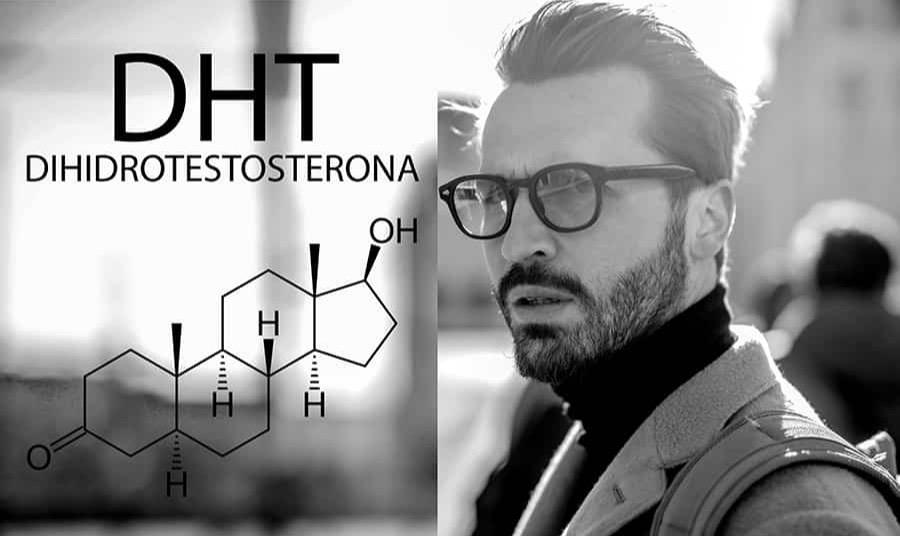 The main cause of hair loss in men is the hormone DHT known as dihydrotestosterone, a steroid hormone that occurs in both men and women.

The 5-α reductase plays an important role in triggering the transformation of testosterone into dihydrotestosterone causing what we know as alopecia.

What is dihydrotestosterone DHT?

Dihydrotestosterone hormone (DHT) is an active androgen of the male hormone (testosterone) that is synthesized mainly in the prostate, testes, hair follicles and adrenal capsules.

This hormone is bound to receptors in the scalp and directly affects the hair follicles and is responsible for men losing hair in the occipital, temple and frontal areas of the head.

If the DHT hormone is blocked we can help to stop hair loss.

How is dihydrotestosterone produced?

The human body produces DHT as a by-product of testosterone through the enzyme 5-α-reductase, an enzyme that converts a certain proportion of testosterone in tissues such as skin, liver, prostate and hair follicles into testosterone.

The hormone DHT is produced with the conversion of testosterone by the enzyme called 5-alpha reductase giving rise to DHT, dihydrotestosterone.

What is the function of the DHT hormone?

At present, other important actions apart from sexual development have been studied and determined, such as being responsible for the initiation, maintenance and development of muscle mass.

In men, DHT is an important factor in androgenic alopecia.

In men, about 5% of testosterone is consumed by 5-αlpha-reductase, forming the most effective and strongest androgen, dihydrotestosterone.

Since DHT is the main hormone that causes hair loss in men, the most effective way to stop and prevent hair loss is to block DHT.

Hair loss in women is more complicated and DHT is only one of many possible causes.

Elevated levels of DHT in women can cause male sexual characteristics in women, such as a deeper voice or facial hair.

Under normal circumstances, the main androgens in a woman's body are androstenedione, testosterone, DHEAS and DHEA.

Can the DHT hormone be blocked or reduced?

Treatments that can help block dihydrotestosterone hormone are finasteride and dutasteride.

We can block the DHT hormone with medical treatments or drugs

It is an effective medicine against alopecia, it offers benefits and proven results. Finasteride acts on the enzymes that concentrate in the hair follicles. It can cause hair loss to slow down.

Treatments such as minoxidil or finasteride can help reduce hair loss and even promote hair growth in some cases.

We can block or reduce the DHT hormone with natural foods

The intake of tomatoes is rich in lycopene, the tomato is a food that provides a natural blocker of the hormone that produces baldness or alopecia. The tomato must be cooked as it favors the absorption of nutrients better than if it were raw.

The regular incorporation of nuts such as almonds or cashews help to obtain vitamins such as Zinc and L-lysine, will help to naturally reduce your DHT levels.

Green tea is a food rich in antioxidants, it helps us to block the conversion of testosterone into DHT. Coffee or black tea have very similar effects that can also help you.

Eliminate sugar from your diet or reduce it. Excess sugar can be a barrier that blocks the benefits of other foods, thus losing their effects.

As it happens with sugar, all excesses do not benefit the body, the same happens with coffee intake. An excess of caffeine can lead to an excess of hormonal imbalances causing an increase in the production of DHT.